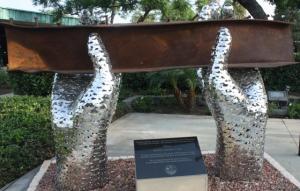 Are they now just two words that have become one,
Like a sigil that’s power has been left to decay.
Are they now just two numbers divided by a line,
like a before and after ad for something that will fix your life.
It was a bright-sky day that became plundered,
like the many other days that share those sounds.
Is this nomenclature of that space of time now lodged in the common tongue?
It is sparse, yet contains the inhaled breath of the moment’s realization,
as we move away, around, forward and backward in search of direction.
We have become the word masters who use each letter as a tincture
to assuage the cell deep memories that underlay the pain and incredulous eyes
as water that remains fluid under ice.
But there are some whose time is still filled with the smoky light that calls its presence forth.
Some lives are dappled by its timbre,
Like the bells that flail their yearly toll.